to be the first to know about our deals and special offers! Imagine walking into your next family get-together with one of these "grazing tables." Cured and Cultivated's food artist knows exactly how to pull it all together.

Eat with your eyes

Cured and Cultivated online deli specializes in artisanal cheese and cured meats sliced to order and delivered to your door. Its grab-and-go plates are also available at several Central Coast wineries, including Halter Ranch in Paso Robles. The deli delivers its wares throughout the state, and local delivery is available for customers from Paso Robles to Arroyo Grande. Cured and Cultivated also caters events throughout SLO and Santa Barbara counties. Learn more at curedandcultivated.com.

About the same time their 15-month-old daughter, Zoia, took her first steps, Anatoly and Katherine Vorontsov launched the most happening cheese and charcuterie business around, Cured and Cultivated. And now, just in time for the holidays, the couple recently began offering online ordering and delivery of their boxes, boards, and "tables" of imported wares up and down the Central Coast.

These artistic grazing meals—often seen at winery events—feature meticulously arranged landscapes, with rivers of cheese wrapping around hills and valleys of salami and soppressata, colored with flowers and olives, nuts, and berries.

These vast spreads are the work of Anatoly. I first met his grazing table at the Perinet After Hours event at Tolosa Winery in SLO.

Anatoly said he found the need to add food to all the wine-tasting goings-on years ago, in 2015, when he began selling cheese and charcuterie at the Halter Ranch Tasting room in Paso Robles, where his wife, Katherine (originally from Texas Hill Country), was working. 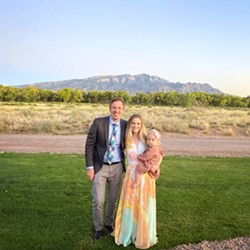 Anatoly, originally from Siberian Russia, said that when he first started out, cold calling the wineries to begin his business, he hoped the winery employees would remember him as the Russian with the meat samples. They definitely did. No doubt they were as impressed with his jolly, humble, hard-working, and innovative character as they were with his artistic, edible offerings.

He told me Russians tend to be pessimistic, always waiting for bad things to happen, but based on his story, good luck seems to ride on his coattails.

Plus, he really knows his stuff. He had me try some of his Csabai Hungarian salami, which tastes lighter and more delicate than the Italian variety I'm used to. He said when he was young, he and his family ate donkey sausage—but what I was eating was a delicately crunchy and delicious pork salami.

During his formative years, his part of the world was dark most of the day, and he grew up eating scoops of lard for sustenance, he said. Eating cured meats was a way of life. In a place as cold as Siberia, food must be preserved and stored when nothing is growing and ranching is difficult.

Preserved meat is still an essential part of Anatoly's life.

Anatoly and his wife met in England and celebrated their marriage with small ceremonies in his Russian hometown and her Texas town. After Katherine took a turn living in Russia, the couple moved to SLO County when she was offered the job with Halter Ranch.

He said he spent a few months waiting for his legal work permit before he was offered a job at the former Enjoy Euro-Deli market in Arroyo Grande, a job he found by chance after overhearing the deli's future owner speaking Russian in a home-goods store.

Anatoly laughed when he said it didn't feel very "American" that there wasn't much eating going on with the wine tasting at the time he was working for the Euro-Deli. I think many of us remember those dark days, when all we could get was a cracker or a heel of bread with our samples of vino.

A Central Coast winery owner once gave Anatoly the advice to balance the meats with cheese, and that's when he decided to add the delicate dairy offerings to his artistic charcuterie plates.

Now, wineries feature veritable deli cases in their tasting rooms, complete with Anatoly's grab-and-go boxes. Picnickers and wine tasters can plan ahead and order from Cured and Cultivated online—grazing boxes and tables, meats, cheese, caviar and fish products, and grains and garnishes. Their most momentous of offerings are the grazing boxes and tables. He said he likes to tell little stories with his boards, boxes, and plates. You can buy one of his beautifully told stories, from a small grazing box, perfect for a picnic or dinner in the park, to a stylized grazing table, which will serve a large gathering.

A Review of Our German Products From German Girl in America